Skopje, September 24, 2019 – The Agency for Audio and Audiovisual Media Services held its third public meeting in 2019, today. At the meeting, Agency Director Zoran Trajcevski outlined the many activities implemented during the past quarter, as envisaged by the Annual Work Programme: supervisions over the broadcasters, the operators of public electronic communication networks and the print media publishers, the public warning measures issued, the conducted analyses, and the activities in the field of international cooperation. 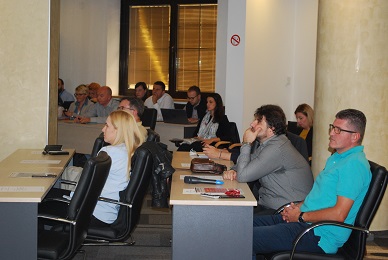 The attendees had the opportunity to learn about the findings of the 2018 Analysis of the Market of Audio and Audiovisual Media Services, which covers the economic operations of the public broadcaster and the commercial television and radio stations, as well as data collected from the measurement of television and radio audiences. The analysis, prepared by the Agency, showed that the revenues of the audio and audiovisual media industry had been declining year by year. According to the data, the total revenues earned by the broadcasters in 2018 amount to Denar 2,451.65 million, indicating a decrease of 6.03% compared to 2017, and are the lowest of all total annual revenues earned in the past five years.

At the meeting, the Agency launched  the new infographics on media literacy: “Behind the Headlines and Behind the “Fake News”, which had originally been produced in English by the EAWI. One of the infographics provides directions on how to identify the different types of misleading news, such as click-bait news, sponsored content, propaganda, disinformation, fabrications, and the like. The second infographic contains a game of educational nature, designed for checking the news on the Internet, such as the validity of the date of publishing the content, whether the authors have been identified or pseudonyms are used, etc. In order to make them accessible to as many citizens as possible, the Agency has printed these infographics in Macedonian and in Albanian.

The presentations held at the Third Public Meeting can be downloaded from the following links: