Skopje, 31 March 2017 – The Agency for Audio and Audiovisual Media Services held its first public meeting in 2017 yesterday. At the event, the Agency Director Mr. Zoran Trajcevski, Ph.D., presented the activities that the Agency had conducted in accordance with its Annual Work Programme, specifically the section referring to Q1 and the supervisions and activities arising from the proposals of the Ad HocCommittee for Monitoring Media Coverage of the Elections, the status of granted/withdrawn radio and television broadcasting licenses, the international and other activities. 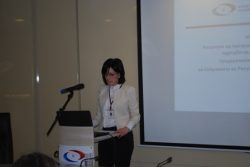 The overview of misdemeanour proceedings initiated against the broadcasters, as well as the results from the misdemeanour proceedings related to the 2016 Early Parliamentary Elections which the Agency had initiated based on the action proposals of the Ad Hoc Committee for Observing Media Coverage of the Elections, was presented by Ms. Ivona MufishevaAleksovska, Head of the Normative and Legal AffairsUnit. The Ad Hoc Committee for Observing Media Coverage of the Elections had submitted to the Agency a total of 260 action proposals, of which 192 required not taking any action, whereas 67 sought to take action. As regards the misdemeanour proceedings, the Agency initiated 63, of which 43sought issuance of warnings, while 20 soughtto impose fines. The deadlines within which the primary courts adopted rulings upon the submitted requests to initiate misdemeanourproceedings varied from 2 to 104 days, counting from the date of their submittal to the court, while the deadlines set by the primary courts for submitting appeals to their verdicts imposing warnings ranged from 24 hours and 48 hours, to 8 days. The deadlines within which the Appellate Courtruled on the submitted appeals varied from 1 to 3 days. 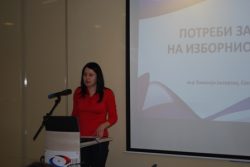 The Electoral Code had been amended several times throughout the years, each time shortly before each electoral process. The provisions referring to the media were frequently amended as well. The provisions on media coverage of the elections underwent some more substantial changes with the amendments made in 2014, 2015 and 2016. The Agency detected a number of weak points and ambiguities in these provisions of the Electoral Code, and informed the competent Ministry of Justice accordingly on several occasions. The 2016 electoral process was concluded, but the Agency still deems there are shortcomings in some of the provisions related to media coverage of the elections. Changes are necessary in the sections referring to monitoring the Internet portals; the rules for fair, balanced and unbiased reporting; free presentation on the Parliamentary Channel; paid political advertising, obligations to report to the SEC, and the criminal provisions and action deadlines. This was stressed by Ms. Emilija Janevska, Head of the Programme Affairs Department, who presented the Agency’s remarks and considerations, as well as the needs to amend the Electoral Code.

The presentations held at the 2017 First Public Meeting can be downloaded at the following links:

Activities Implemented in Accordance with the AAAVMS’ Annual Work Programme

Needs to Amend the Electoral Code

Ажурирано: јули 2019 година
Necessary Always Enabled
Necessary cookies are absolutely essential for the website to function properly. This category only includes cookies that ensures basic functionalities and security features of the website. These cookies do not store any personal information.
SAVE & ACCEPT